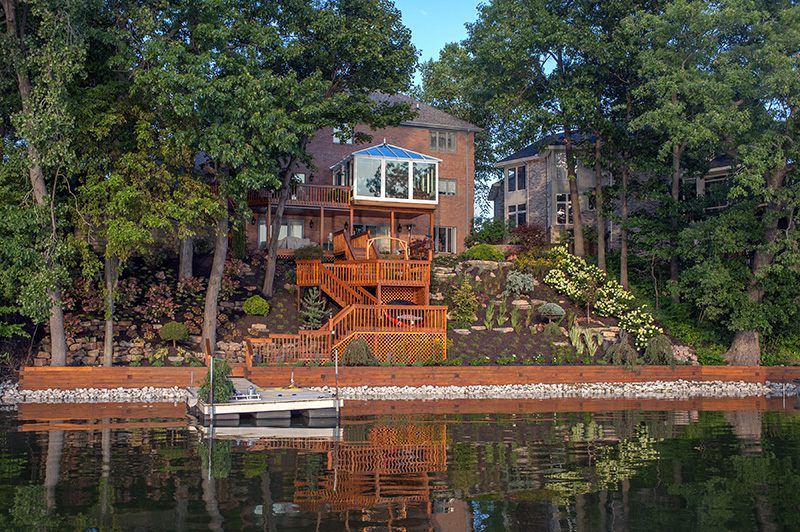 Becky is the mastermind behind this epic garden and it won the 2014 INLA Best Design Build Award. When meeting with the owners at their lakeside property, it was very clear of their love for plants. There were many different challenges with the property. It was very narrow in the front then widening out to the lake front. The narrow front access limited the amount of equipment that could be used to do the job.

The lakeside was steeply sloped, heavily wooded, overgrown so much that the house was not visible from the lake nor were the clients happy about their lack of lake view. The rest of the homes’ landscaping was also very dated and overgrown. Everything was removed except one mature Japanese Maple.

The owners wanted to show case the lakeside of the property and also get a firepit seat area with the focal point being the lake. Easy access was requested from both sides of the house. Starting on the lakeside slope, 200 yards of pulverized topsoil peat and 40 tons of moss rock outcropping were hand delivered to the lakeside one wheelbarrow and rock at a time to soften the slope and create planting areas. Plantings on the lakeside included different Japanese Maples along with unique varieties of conifers, some multi-grafted. Different varieties of Hydrangeas, Rhododendrons along with mixed sun and shade perennials, grass sedges, and multiple types of ground covers were planted to complete the layers of color and textures.

The firepit area had the same challenges as the lake side. It had limited access, was sloped, and unusable. The lowest area was dug out and leveled to create a fire pit area. The fire pit was mortared with a gas log lighter surrounding the fire pit and select flagstone seat area. A tumbled stone seat wall with sawn stone steps was built leading to the upper garden with meandering flagstone path to the front of the house. The landscaping in this area included Specimen Japanese Maple planted to block the view when coming from the front. Rhododendrons, Azaleas, mixed perennials and unique evergreens and ground covers to complete the area.

The front of house was overgrown with Yews, Arborvitae, Boxwoods, and Pachysandra that the owners did not like. The front landscaping beds were in large brick edging removed. Pulverized topsoil peat was installed to create undulating beds with moss rock boulders. Plantings in the front landscaping were to create curb appeal covering the electrical boxes in front and generators along the side. Three different Japanese Maples, Boxwoods, and mature Spruce with Hydrangeas, mixed perennials, and ground covers. Boxwood Green Mountain planted to block the utilities and generator.

What was left of the yard was newly sodded and the total property had a custom irrigation system installed. At completion, the owners achieved their show case lake side property with many thumbs up from the passing boaters. A neighborhood party was given in appreciation for everyone’s patience during the construction and landscaping. 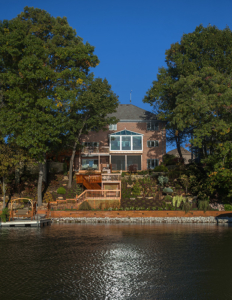 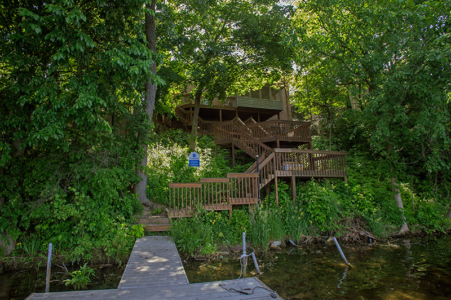 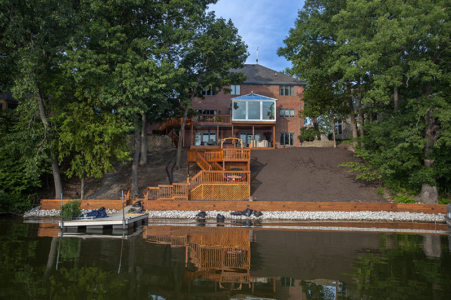 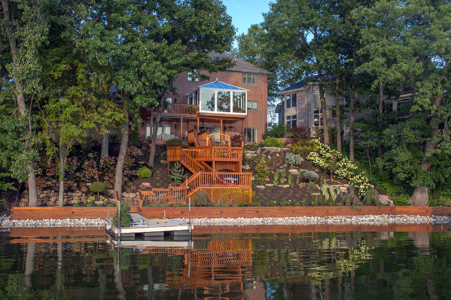 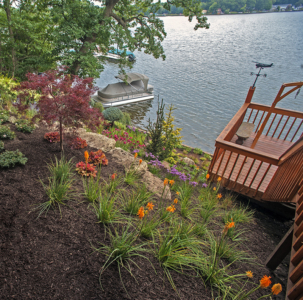 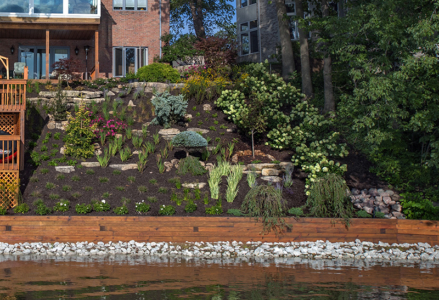 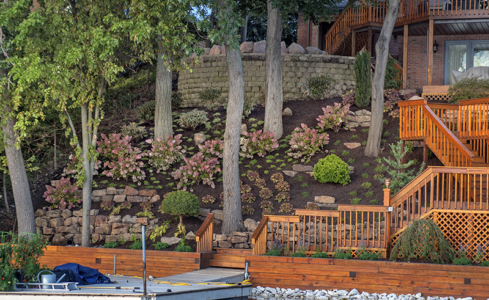 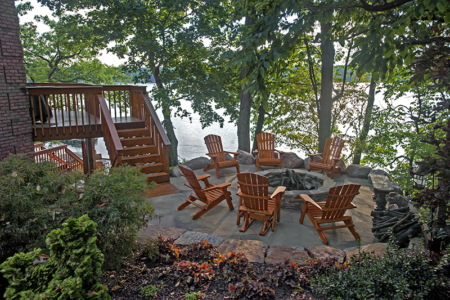 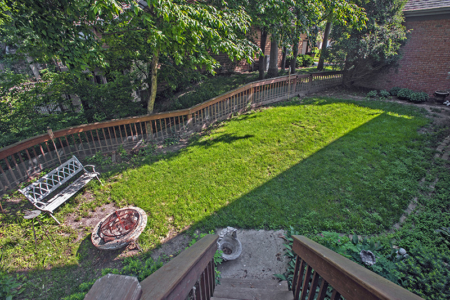 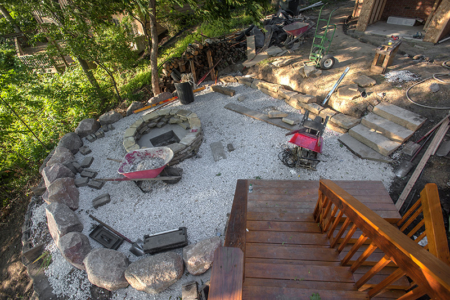 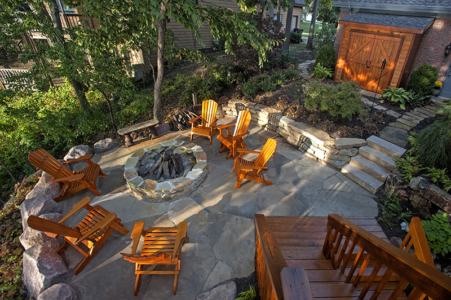 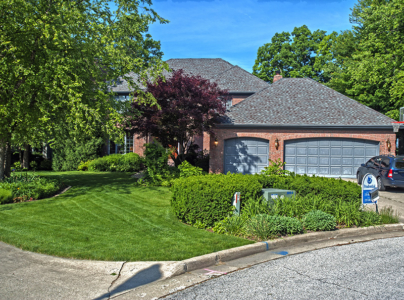 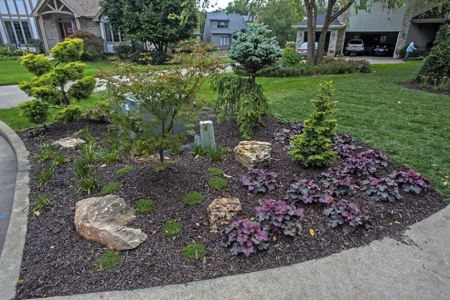 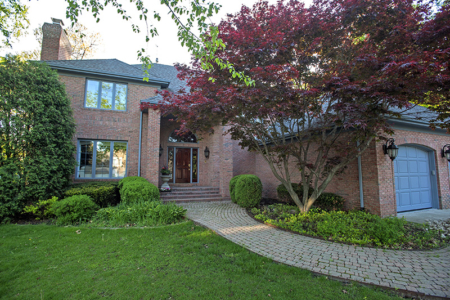 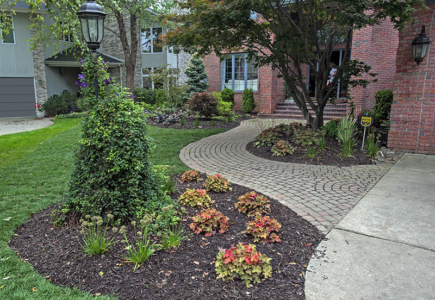 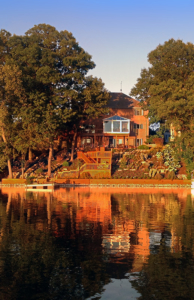