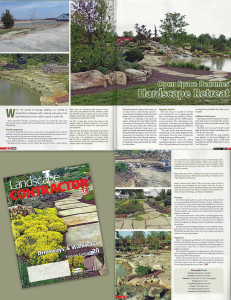 Located in Merrillville, Ind., the site is near a busy road and prior to the overhaul, featured a spring-fed pond and empty land. Marshall said the first step was to reshape the pond to bring more movement to the body of water.

“We utilized a Hitachi 330 excavator with a progressive hydraulic thumb and a two and one-half yard bucket to…reshape the pond,” Marshall said.

Marshall said the business owners wanted the new site to have a water feature. Marshall proposed a design with a large water feature with a variety of plantings and a choice of rocks including moss limestone and granite. The moss limestone was selected.

The water feature is actually two 15-foot wide waterfalls that were created using the moss covered limestone boulders. Two five-horsepower pump provide 60,000 gallons of water per hour. The water feature is approximately 12 feet high, and this height and the additional plantings effectively shield this new outdoor space from the road.

“You can’t see the area from the street,” Marshall said. “Horn beam hedges hide the water feature (from the road) and give the feeling of being in a different place.”

A hidden walkway across the rushing waterfall provides easy access to both sides. Also, a lily pad walkway into the pond ends at a large four ton boulder for sitting to contemplate.

The design includes a long set of outcropping steps down to the pond. The outcropping is also used as a seat wall around a flagstone patio.

Tumbled stone was used to build a large eight-foot fire pit, with an installed gas starter for the fire and a grill.

Marshall noted that the large boulders were shipped on site from Michigan, the flagstone was shipped from a Utah-based manufacturer and the cobblestone on site is from Wisconsin.

An extensive plant pallet was used on this project to provide the serene surroundings desired by the business owners. Plantings consist of hundreds of perennials and grasses for splashed of year-round color, cover and food for birds. A hornbeam hedge gently curves at the back of the bed providing the requested privacy from the road. Onsite evergreens were relocated to new berms by the street and the perimeter of the site.

The contractor planted a variety of trees, including Japanese Maple, Dwarf Conifers, Sweet Gum and Oaks which provide their own interest at different times of the year. Ground covers were added to spread throughout the flagstone patio and plantings, providing a layered look.

Marshall noted that Chicago Decking’s custom is to plant an evergreen tree every time one of their projects is completed. As a result, Marshall has specified the location for future evergreen plantings in relation to the new space design.

Small’s Landscaping used Kubota 520 articulated loaders with backhoe units attached, because, according to Marshall: “These are a very useful and versatile piece of equipment. Their advantage over a mini excavator is that here is a bucket and long forks as well as grabber attachment.”

GE Marshall Excavation was a subcontractor on the project and their excavation equipment was used for the reshaping and heavy duty grading of the entire property.

Small’s Landscaping’s Mack tri-axle saw use on this project and semi dump trucks were hired from GE Marshall Excavating to haul pulverized topsoil to the site. In addition, a hydro seeder was used to seed approximately five acres of lawn.