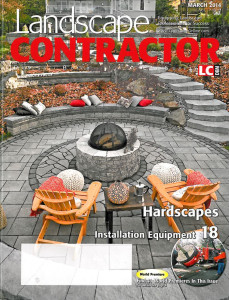 Landscape Contractor/DBM received many outstanding hardscape submissions for this issue and it was a difficult choice as to which ones to feature. So a showcase to highlight some of those not chosen was in order, and even that presented dilemmas. Ultimately, these projects were selected because they display a wide variety of styles, materials, and features from throughout the country (and one from Canada). You’ll be seeing more of the remaining submissions in future issues.

EP Henry village square pavers with brickstone borders were installed on the pool deck by Evergreen Hardscaping at this residence in the Boothwynn, Pa., area. The fire pit, steps and raised bond beam of the pool are faced with Fenoff building stone. The pool coping, fire pit caps and step treads are Pennsylvania antique flagstone. George Schoffield near Edison, N.J., provided the building stone, and Rotunno Stone Yard in Avondale, Pa., supplied the flagstone. A mix of flagstone and native boulders were used for the waterfall. The wall in the backdrop is also made of native granite boulders. When the pool was dug, the excavator hit a large granite deposit. After unsuccessfully trying to break up the deposit, explosives were used. Evergreen reclaimed all the stone and incorporated it into the waterfall and surrounding landscape. All illumination is Cast Lighting from Aquarius Supply of Hawthorne, N.J.

In Big Sky, Mont., Blanchford Landscape Group paved this expansive driveway with six-inch reclaimed European Porphyry cobblestones to mirror the rustic look of the house. Reclaimed American granite curbing, or planking, was used to divide the cobbles, and create a rectangular pattern. The materials were provided by Stone Farm of Newtown, Conn., a supplier and manufacturer of stone products.

The walkway, bench and infinity edge at this home in Janesville, Wis., are made of we-set piranha stone, which comes from Brazil, mixed with golden sunset stone. JJ Hayden Inc. of Woodstock, Ill., designed and installed the hardscape and landscape. The boulders holding up the bench, and on the face of the bridge and the waterfall are Wisconsin granite. Lining the walkway are Sedum autumn joy and Chicago fire burning bush. Gold lace juniper, white pine, bald cypress and autumn blaze maple create the backdrop. The large boulder feature at the end of the pool is a waterfall. The bridge connects the home and pool area to an island that Hayden also set up. It has a large waterfall that starts higher up the hill and recirculates from the lake that the bridge crosses over. A variety of Hydrangeas and assorted perennials line the lake’s shore.

These pictures show parts of two of the four terraces build by ThinkGreen LLC at a residence in Easton, Conn. All four terraces feature bluestone steps and patios enclosed by dry-laid Pennsylvania fieldstone retaining walls, which incorporate accents of larger boulders jutting out from their bases, adding to the natural rustic feel of the space. Some of the boulders were existing and so massive that instead of moving or blasting them, they were incorporated into the character of the terrace. The wall caps are also bluestone. The upper terrace is a main dining area. One step down, the terrace features a monolithic slab bench built into the wall that faces the fireplace built of firebrick and enclosed in dry-laid Pennsylvania fieldstone with bluestone coping and small stone slab shelves set in to its face. The lighting is from Cast Lighting Systems.

At this residence in Chicago, Heffernan Landscape Design completely rebuilt the backyard, which had been reduced in size by a new addition to the house. To maximize entertainment space, they eliminated the lawn and installed two intersecting bluestone panel patios bordered with Whitacre Greer old Chicago bricks that transition to the same brick in the sidewalk to the front of the lot. The patio is framed in two opposing L-shaped seat walls, which are poured concrete with bluestone coping. Heffernan let the walls show the texture of the framing lumber. They got rid of the straight walk to the back gate, and poured several large offset concrete pads to echo the offset planes of the patio. The walk is framed in Pennisetum “little piglet.

Eagle Bay products made up all of this paver pool deck with a raised patio, hot tub, tanning ledge, spillovers, walkways and driveway installed by Basnight Land & Lawn Inc. The pool deck is Jefferson-colored Chatham stone. The coping is Chesapeake-colored bullnose. Walls were made from Jefferson highland stone and the border courses from Chesapeake cottage stone. Over 100 pallets were needed. The project was competed under strict guidelines set forth by the Chesapeake Bay Preservation Act. Weather played a major factor in the winter months since the property in Chesapeake, Va., is surrounded by water on three sides. The pool was installed by Blue Water Pools.

The homeowners of this property in Ottawa, Ontario, had a landscape dilemma; a dramatic elevation change. Jonathan Robert Landscape + Design suggested connecting the upper pool patio and lower patio with natural-looking Maya steps from Techo-Bloc. The project also featured Blu60 slabs and flagstone pavers in the lower patio, the Mini-Creta blocks in the retaining wall, and a Valencia fire pit.

Homeowners in Erie, Pa., were seeking a new hardscaped look for their suburban backyard that would use their existing clay brick pavers, fountain, and a small garden wall, so Dahlkamper Landscape designed and installed a curvilinear Italian-style plaza. To provide a different color palette, the project incorporated a contrasting paver; Unilock’s Brussels block in a Sierra color, and a half-stone, double basket weave pattern. The existing pavers were used on the path and as a border to tie together the old and the new. The raised patio with its large central oval contrasts with the rectangularity of the house and provides a large open space with the flexibility of usage the homeowners required. Hosta and rudbeckia are planted in the foreground. The ornamental tree on the left is a serviceberry. The backdrop is hemlock and hydrangea.

A network of flagstone paths brings these homeowners in Michigan City, Ind., around their residence to the backyard. Smalls Landscaping installed a six-foot-wide path, designed to let the owners use a cart to help maintain the yard. There are other smaller paths leading to a deck, driveway, and the fire pit patio. The fire pit is natural, tumbled stone, mortared together. The seat wall is also natural stone, with each one cut to six inches thick and 20 to 24 inches deep. The paths and patios required over 50 tons of flagstone. Spread throughout the landscape are 68 tons of limestone boulders. Natural stone steps lead up and down various elevation changes. Over 1,500 yards of pulverized topsoil peat were used to create the grade changes and undulating beds. The plantings consist of a variety of evergreens, Alaskan cedars, Chamacyparis, olga Mezzitt Rhododendrons, Azaleas, ferns and boxwood. The ground cover is hosta and pachasandra with Mazus Reptans planted between the pathways’ flagstones. Smalls won first place in the state of Indiana in 2013 from the Indiana Nursery Landscape Associations.

This summer home in Gilford, N.H., was furnished with a permeable hardscape, including Belgard pavers, by Natures Elite landscaping of Meridith, N.H. The pathway stones are called Boston Blend flagging, sourced from Gilbert Block in Laconia, N.H. They were installed on a crushed stone base to allow the water to remain onsite. About 15 tons of flagging were used. Local supplier Natt King Stoneworks, provided the stone for the seat walls. The caps with veins of white running through them are Sunapee black granite, named for the town in New Hampshire where they came from.
Inset: Between the two deck chairs is a large stone table that was sourced from American Cottage in Gilford, N.H. It is estimated to weigh 1,200 pounds and took eight men with straps and boards to carry it. The table was rolled into its final resting place on pipes. The planting list focused on colors and scents of summer and includes” Azalea summer sweet, Azalea Viscosum, Wegilia wine and roses, Rhododendron.