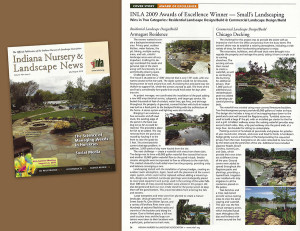 The owners wanted to create a backyard entertainment area.  Privacy pool, outdoor kitchen, water features, fire pit, fishing, multiple seating areas, and lush, colorful landscape areas were all very important.  Crafting this design combined the needs and personal style of the client along with functionality in an aesthetically pleasing space.

Challenges were many.  The house is situated on a 1300’ deep lot that is only 110’ wide, with one narrow access to the rear yard.  The septic system could not be relocated, forcing crews to work around it as well.  An existing five acre pond was too shallow to support fish, which the owners wanted to add.  The front of the yard had a considerably low-grade that would hold water for days after any rain.

As project manager, we coordinated the installation of the pool adding a new 400 amp electrical service, subpanels, and larger gas service.  We buried thousands of feet of conduit, water lines, gas lines, and drainage throughout the property.  A gourmet, covered kitchen with built-in heaters was built as a focal point to the backyard linking with the architecture of the home.  A stereo system and lighting were also included.

Bringing in an extend-a-hoe excavator and off-road truck, the existing edge of the pond in the back was dug out as far as could be reached.  This provided a place for fish to be added.  The clay removed from the pond was reused by hauling it to the front to raise the grade by 3 feet.  This eliminated the current drainage problem.  In addition, 3,000 yards of clay were hauled from the site.

Landscaping started with the installation of privacy hedges, creating an outdoor room atmosphere.  Again, faced with the placement of the current septic system, which could not be replaced without adding a mound system, design was restricted.  Landscape plantings were strategically placed to cover pool equipment and pumps used in the running of the water falls.  Over 300 tons of moss-covered boulders were utilized in this project.  We also designed and built our own intake stand for the pump screen to keep them off the pond bottom.  This prevented debris from entering the falls and streams.

Large evergreens and trees were then planted to create a mature landscape.  Unusual specimens such as Sweet Sarah Fir, Glen Walter Spruce, and a variety of Parviflora Pines were used.  Hundreds of sedums filled the nooks and crannies of the boulders and along the stream.  Due to limited space, a lull was used to place trees and the large containers were taken to their locations with a pallet jack, pulled across track mats.

The challenge for this project was to provide the client with an impressive view from the office and privacy from the busy street.  The owner’s desire was to establish a relaxing atmosphere, including a wide variety of trees, for their hardworking employees to enjoy.

The excavators, bulldozer, and off-road truck were brought in to regrade the property and reshaped the pond, taking it from a simple oval to curving shorelines.  The existing soil was then reused to create a waterfall, as well as contouring the burming for additional privacy.  Over 1,000 yards of pulverized topsoil peat was added to develop substantial planting beds.

The waterfall was created using moss-covered limestone boulders.  Two five-horsepower pumps provide 60,000 gallons of water an hour.  The design also includes a long set of outcropping steps down to the pond and a seat wall around the flagstone patio.  Tumbled stone was used to build a large 8’ fire pit, with an installed gas starter for the fire and a grill.  A hidden walkway across the rushing waterfall provides easy access to both sides.  Also, a lily pad walkway into the pond ends at a large four- ton boulder for sitting to contemplate.

Plantings consist of hundreds of perennials and grasses for splashes of year-round color, interest, and cover and food for birds.  A hornbeam hedge gently curves at the back of the bed providing the requested privacy from the road.  Evergreens on site were relocated to new burms by the street and the perimeter of the site.  Additional trees included Japanese Maple, Dwarf Conifers, Sweet Gum, and Oaks, which provide their own interest at different times of the year.  Ground covers were added to spread throughout the flagstone patio and plantings, providing a layered look.  Irrigation was installed with drip irrigation to all the containers placed on the patios.

Teak benches and a moss rock bench provide various seating areas to view the landscaping and waterfall.  This year was the first annual company picnic, which included kayak races throughout the day and finished with s’mores around the fires.