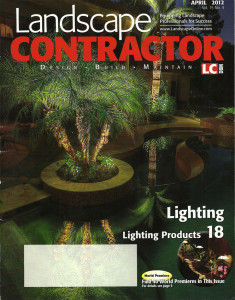 The contractor installed 13 lights in this area. The front of the house is illuminated using six Kichler 4.5-watt LED low-voltage directional spots. Lighting for the ground cover area comes from 4.5-watt “Hammered Roof” path-lights spaced 15 feet apart. Both lighting sets get their power from a 300-watt transformer located on the right side of the house. The large pots by the front walkway were accented with 4.5-watt, 60-degree directional LED spots. Workers planted Japanese Maples and Hicks yew hedges along the house, as well as Mazus Reptans ground cover and Hackonechloa Aureola grasses in the front yard.

The lighting crew wired in 4.5-watt LED path-lights and hard wired them with 12/2 direct burial wire. The wires were run to a transformer located 150 feet away. The landscape crew planted both Lysimachia Aurea ground cover and a Blue Nest Spruce in this area.
Small’s Landscaping & Landscape Illumination’s 10-acre project in Dyer, Indiana was a massive endeavor that completely redefined the entire project, including two massive stream systems with waterfalls, a dredged 5-acre lake, a new pool, hardscape, thousands of plants and an extensive lighting system.

The client’s one-line desire was to be able to enjoy the new landscaping both during the day and night as well. This seemingly simple request resulted in a massive 5-acre reconstruction project. The owners wanted to create a backyard entertainment area for their family and friends. The contractor built a pool, outdoor kitchen, water features, fire pit, multiple seating areas and planted a lush, colorful landscape, not to mention installing the elaborate lighting system.

Above: Workers wired an existing patch of maple trees with 8.5-watt, 60-degree LED directional spot down lights. They mounted the lights 25 feet up from the ground, and secured the light to the tree with a tree-mount bracket with tree-safe stainless steel screws.
Right, middle: To under-light the waterfalls, the contractor installed 4.5-watt LED pond lights that were wired with waterproof low-voltage cable which get their power from a transformer located in the center of the water feature area. Workers planted hundreds of Sedums to fill the boulders’ nooks and crannies. Electricians ran high-voltage line to 27 outlets spaced throughout the property. These outlets were used to power both low-voltage lighting transformers and line-level waterfall pumps.

The lighting portion of the project took one month to complete, and employed three full-time workers. The company subcontracted the high-voltage work to an electrician. The electrician pulled thousands of feet of A/C wire through conduit and wired in numerous sub-panels throughout the property. This was done to reduce the amount and distances Small’s Landscaping had to pull their low-voltage wiring. According to Small’s, “There are a number of dedicated outlets on this project spread out all over the property. Once we determined our light fixture placement we then decided on where the transformers should go to prevent unnecessary wire runs.”

The main lighting objective was to provide illumination for the water features, pathways, and multiple seating areas. To this end, the contractor installed lighting on tall poles hidden behind arborvitae hedges, to be tuned on when volleyball or other lawn games were played in the evening. They used more the 5,500 feet of 12/2 wire, 500 feet of 18/2 wire, and a 1,000 feet of 10/2 wire, along with 600 direct-bury splices and 4,000 8-inch sod staples. The fixtures were all low-voltage LED and the wattages of the fixtures range from 20 to 50 watts of output.

No less the 37 4.5-watt LED pond lights were used to light the waterfalls and streams. They were wired with low-voltage waterproof lighting cable. The landscape crew planted Weeping Pines, Hostas, Hydrangea, Japanese Maples, and hundreds of sedums. The tree in the center-right is a Prunus Virginiana Canada Red.

The shrubs shown were lit via 4.5-watt, 60-degree LED directional spots and are hard wired with direct-burial low-voltage cable. More than 300 tons of moss-covered boulders were utilized in this project. The boulders were trucked in from Missouri, and placed using a Lull, Bobcat and Kabota 520 articulated loader. Workers hand-placed the cobbles and large boulders designed into the stream to create narrow areas to speed up the water flow. The stream systems feature a DPM rubber liner.

The house sits on a 1,300-foot deep lot that is on 110 feet wide, with one narrow access to the rear yard. The septic system could not be relocated, forcing crews to work around it. An existing 5-acre pond was too shallow to support fish, which the owners wanted to add. There was also an existing drainage problem on the property. To fix this, the contractor raised the pool grade up more than a foot above the existing grade. Drainage for the entire property was done painstakingly, as Small’s Landscaping dug French drains throughout the property.

The contractor began the project by clearing the front of the property, after which the pond’s existing edge was dug out more than 20 feet deep. This provided a place for fish to be added. The clay removed from the pond was reused, by hauling it to the front to raise the grade by three feet. This eliminated the properties pre-existing drainage problem. In addition, 3,000 yards of clay were hauled from the site.

In this area, workers planted Hyperion Daylily, which grows to about three feet tall and produces a prolific clear-yellow flower in the summer. To light the Hyperion, a crew wired-in 4.5-watt LED lights, which were spaced 15 feet apart.

The landscaping part of the project started with the installation of privacy hedges, creating an outdoor room atmosphere. Plant material was strategically placed to cover pool equipment and waterfall pumps. Large evergreens and maple trees were planted to create a turn-key mature landscape. Unusual specimens such as Sweet Sarah Fir, Glen Walter Spruce and a variety of Parviflora Pines were used. Workers planted hundreds of sedums to fill the nooks and crannies of the boulders and along the stream.

The design called for the creation of twin stream/waterfall systems. The crews trenched out a 60,000-gallon waterfall that flow towards the house and another 30,000-gallon waterfall that flows to the pond in back. Smaller streams alongside were incorporated as offshoots to the main falls. This created a multi-sided view from the property. All the streams were lined with DPM rubber liner. Workers used Lull, Bobcat and Kabota 520 articulated loaders to place more than 300 tons of moss-covered boulders along the streams. Once in place, crews hand-precisely placed the cobbles and boulders into the stream beds and waterfalls.

As project manager, the company coordinated the installation of the pool, adding a new 400-amp electrical service, sub-panels, and larger gas service. They buried thousands of feet of conduit, water lines, gas lines and drainage throughout the property. Landscaping plantings were strategically placed to cover pool equipment and pumps used in the running of the waterfalls.

A covered kitchen with built-in heaters was built as a focal point to the backyard, linking with the home’s architecture. The company also wired in a stereo system for this area.