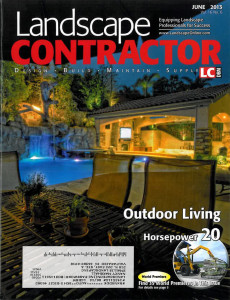 Challenges were many. The house sits on a long and narrow lot, with a single access to the rear yard. The septic system could not be relocated, forcing crews to work around it as well. An existing five-acre pond was too shallow to support fish, which the owners wanted to add. The front yard had a considerably low grade.

As project manager, Nancy Marshall, president of Small’s Landscaping, coordinated the installation of the pool, and oversaw the addition of a new 40 amp electrical service, subpanels, and larger gas service. Thousands of feet of conduit, water lines, gas lines and drainage were installed throughout the property. A gourmet kitchen with built-in heaters was a focal point in the backyard, linking the outdoor rooms to the architecture of the home. A stereo system and lighting were also added.

Installation began with clearing the front of the property, which was completely covered in brush. Using an excavator and off-road truck, the existing edge of the pond was dug out as far as could be reached. This provided a place for fish to be added. The clay removed from the pond was hauled to the front yard to raise the grade by three feet, also eliminating a drainage problem. Three thousand yards of clay were also hauled from the site.

Installation of the swimming pool followed the pond excavation. A stainless steel hot tub was installed on the pool deck by building a concrete block wall to hold it up and a sump pit to keep it dry.

The next challenge was to create a waterfall with views from three sides. Sand was hauled in to form the 11-foot water feature and compacted in lifts to ensure stability. Moss boulders were installed on top of the liner, and three five-horsepower pumps were installed on a pad adjacent to the feature instead of underwater, to assist with future maintenance.

The pumps circulate 60,000 gallons of water per hour over the main falls that face the house and an additional 30,000 gallons over the back and multiple side falls. Workers installed electrical lines and built screens for the intake system. Smaller streams alongside were incorporated as offshoots to flow to the main falls. All of the waterfalls flow into one stream and back into the pond to be recycled.

Landscaping began with the installation of privacy hedges, creating an outdoor room atmosphere. Again, faced with the placement of the current septic system, design was restricted. Landscaping plantings were strategically placed to cover pool equipment and pumps used in the running of the waterfalls. Over 300 tons of moss-covered boulders were utilized in this project. The also designed and built their own intake stand for the pump screen to keep them off the pond bottom. This prevented debris from entering the falls and streams.

Large evergreens and trees were then planted to create a mature landscape. Unusual specimens such as sweet sarah fir, glen walter spruce and a variety of parviflora pines were used. Hundreds of sedums filled the nooks and crannies of the boulders and along the stream.

The owners enjoyed each and every phase of the project as it was completed: swimming in the pool, climbing the waterfall, fishing, volleyball, fires and more.